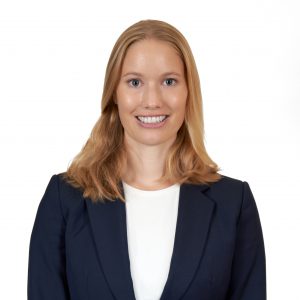 Nienke is an attorney who specialises in commercial and insolvency litigation and advice. She is a senior associate in our Litigation, Insolvency & Restructuring group.

Nienke’s practice consists of high value and multi-party disputes and litigation, and the cases she is instructed on often include cross-border and multi-jurisdictional elements. Nienke is a highly experienced advocate with an extensive background in both corporate and personal insolvency matters as well as large-scale commercial litigation. She advises on both on- and off-shore matters, and has acted for a wide variety of parties, including multi-national (investment) banks, companies, investors, creditors, debtors and insolvency practitioners. Nienke also has experience working for the UK Financial Conduct Authority and was seconded to HSBC.

Nienke obtained degrees from the University of Oxford (New College) and Harvard Law School before being called to the Bar of England & Wales. Prior to joining Campbells in the Cayman Islands, Nienke was a member of a leading set of Commercial Chancery chambers in London where she was instructed as both sole and junior advocate in relation to a wide number of commercial and insolvency disputes.

Nienke also speaks Dutch and French, and has moderate knowledge of Spanish and German.

(Prior to joining Campbells)